It is no secret I am a huge fan of Baby-wearing. But like many I didn’t know much about it until I had my baby. I had registered for the Bjorn, because that is what people do. I didn’t realize until late in my pregnancy there were other carriers in many different forms.

Before Squish was born, several people had raved to me about the Moby Wrap. I being the wannabe thrifty mama thought I could get it for less money. So I bought a similar type of wrap. And while I enjoyed it when Squish was all itty bitty, the more weight he gained, the less I felt comfortable using it. The fabric was just so stretchy. I eventually bought another carrier, and then another. I was hooked on the benefits and conveniences of Baby-wearing.

When Squish was 13 months old I had the fantastic opportunity of participating in a Pilates inspired mother-baby workout video. Moby was one of the amazing sponsors. Since Squishy was older, I opted not to use the Moby because of my prior experiences with a similar style wrap carrier. However, on the second day of filming, Squish didn’t want to be in his stroller. He wanted to be held. So I asked to try the Moby. I was extremely surprised by what happened next. Squish loved being in the Moby, and I felt very comfortable wearing it. Unlike the carrier I had purchased when he was an infant, Moby Wrap was very supportive. While it was stretchy to accommodate Squish it didn’t feel like he was weighing it down, or he was too heavy for the wrap. 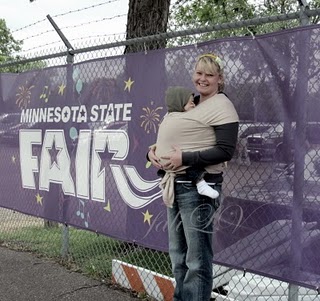 Recently Moby Wrap Inc. sent me one of their UV Moby Wraps. I love using it. I love that it adds extra sun protection for my Squish which is important to me since I live in a climate that is sunny 85% of the year. The 100% Cotton allows air to flow through easily, and helps to keep both Squish and me cool. I wore it to the Minnesota state fair when I went to visit my family. I thought it was forecast to be hot and sunny, but like many Midwestern days the weather through a curve ball, and instead it was in the high 50s and pretty windy. What I thought would be a great day for the UV protection, turned out to be a great day to snuggle up all close in the Moby and share body heat. 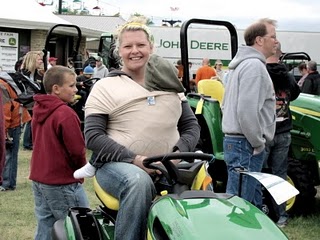 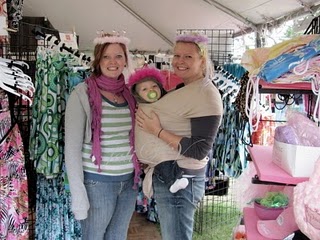 Squishy’s first ride on a John Deere ~ My sister and I being silly, they didn’t have any crowns so Squish wore a tiara too! 😛

I have found another carrier I loved! I wish I had bought the Moby Wrap originally. It is actually really well priced. I had actually only saved a few bucks by going with the other wrap, and it wasn’t nearly the quality of the Moby Wrap. Not to mention if I had gone with the Moby to begin with I would have figured out how to nurse in the carrier. Instead it was months before I found the freedom nursing in a carrier provided.

Each Moby comes with a book that shows you the many different ways you can carry your baby in your new wrap. Their web-page is also filled with great information and even videos to hep you if you need them. The wrap also comes with a matching carrying case. I have heard a lot of people say that the wrap looks complicated, but honestly I can get the wrap on just as fast as most of my other carriers. Like most products after using it a couple of times, it just becomes second nature. I love that you can wrap it on before leaving the house, and not to have to do anything other than slip your child in while you are out and about.

If you are new to baby-wearing, or a seasoned pro, the Moby Wrap should be in your fluffy pile for sure!! On the Squish rating scale, the Moby Wrap gets an Extremely Squishable!

Disclosure: Moby sent my a UV wrap to review, but I did not receive any monetary compensation for this review. This review is 100% my honest opinion, and may differ from your view.