I am interrupting Mommy’s Lil Monster Bash to share this special day. We, in a few hours it will be this special day. You see not only does October 4th mean that my not so little Squishy is 16 months old, but 2 years ago today our lives were instantly changed by 2 pink lines and a bottle of water.

The Hubs and I married on April 4th of 2008. He deployed a month later on May 4th. September 4th he arrived home early after injuring his knee overseas. (No worries, he is fine now.) October 4th was our 6 month wedding anniversary. And I also happened to be 1 day late. I knew I was pregnant. The hubs was certain I wasn’t. So I took a test that I had on hand, and there it was – the faintest possible second line I have ever seen.

The Hubs said that it wasn’t a positive, because if you had to look that close, it had to be wrong. So I chugged a bottle or two of water, and took the second test. It came out negative. The Hubs said “See, I told you.” But I knew my body, and I knew I was pregnant. So we went out to the store and bought some more tests. That night I drank more water and took another test, negative. So I went to the internet and learned that drinking water dilutes the test, and you could possibly get a false negative. So we would wait. 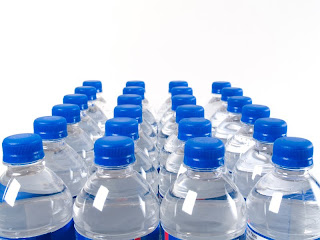 The next morning I woke up early, (4am early) took the digital test into the bathroom, and wouldn’t you know – PREGNANT.

(Not my actual test)

I slipped back into bed, a jumble of nerves and excitement, and wispered to my Hubs, “You are going to be a Daddy.” He responded “That’s nice.” and rolled over with a smile on his face and said. “I love you.” before falling back to sleep.

That was the most amazing 6 month anniversary present we could have asked for. Yes, Squish was an unplanned, but very much wanted baby. We had talked about trying at our one year anniversary, but in true Squishy fashion, he wasn’t going to do things on anyone else’s time table but his own.

I don’t think you can ever prepare for how quickly your life changes when you have a child. The love of my life and I made the love of our lives together, and there is nothing more amazing then that. We look forward to many years of happiness, joy, and sleep deprivation. I wouldn’t have it any other way.

Thank you Squish for choosing your daddy and me to be your parents. We love you more than you will ever know or even understand until you have children of your own.

I love the sun for days, the moon for night, and you forever. ~ Anonymous.